Where do backpackers go travelling? Instagram data can tell. So we grabbed the meta data from all photographs using hashtag #backpacker from 2013 to 2015 and traced them. The result are 470 000 travel routes from 39 000 users.

A closer look at Europe (city names in German) 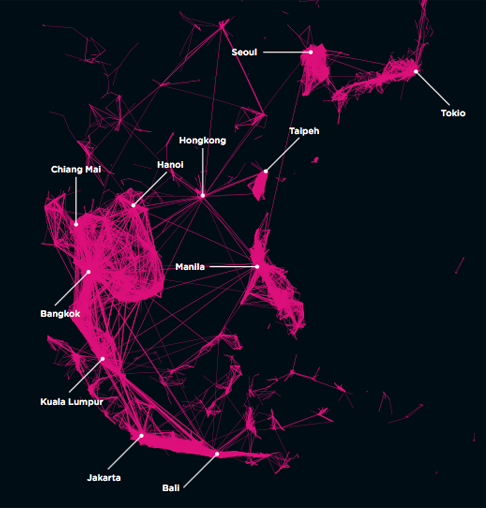 The map is clustered and the lines are brighter when over short distance and darker when long. That way you can see the routes more clearly.

Even though backpackers are considered as very individualistic, the map suggests: maybe not so much. While Southeast Asia seems a bit overcrowded Africa is hardly visited (though you can see the safari routes in Kenya and Tanzania). You can even see tracks like the traces of the thousends of pilgrim on the Camino de Santiago in Spain.

There are surprisingly few #backpackers in the United States. The reason might be that backpacking is indeed not that popular there. Or that the majority of Instagrammers are from the US and therefore leave their traces more in Europe or Southeast Asia. I am not sure but I think you can see the Appalachian Trail.

The map was created by my colleague David Goldwich using mainly Spatialite and QGIS (please note: since Instagram restricted API access in July 2016 we can no longer do such analytics).

The cities named were chosen just as an orientation and do not necessarily indicate bigger data clusters.

The analysis is part of our book «Nach dem Wochenende bin ich erstmal #krank» which was published in Germany in December 2016, a collection of 200 charts about life on Instagram and what data reveals about us. You can take a look into it here.